Dell has officially launched several new monitors with the promise of delivering incredible refresh rates. Dell announced its four gaming monitors, three of which have curved screens, which will be released in the US market between the end of May or the end of June.

Unfortunately, even though they still keep their mouth shut about the price, the company says that everything supports AMD FreeSync Premium or Premium Pro, as well as variable refresh rate (VRR).

VRR is a must for those with consoles like the Xbox Series X and PS5 (although the latter consoles haven't really received the promised VRR update yet). This feature limits screen tearing that may be distracting at times.

However, before discussing this, how familiar are you with the notion of refresh rate?

At least you will listen to this sentence when you want to buy a monitor. Refresh rate is the best option to get a great gaming experience. This can be a necessity when playing competitive online games.

Playing games with a higher refresh rate can have an impact on your gaming experience. This will be especially relevant in fast-paced and competitive games where every frame counts. However, simply buying a 144Hz or 240Hz screen isn't enough to see the benefits.

When paired with the high frame rates generated by the GPU and CPU working together, this can result in a smoother gaming experience and potentially higher FPS.

Monitors can only display images at a rate your system can produce, so it's important that your CPU and GPU are able to complete this process quickly.

If the CPU and GPU are unable to provide a monitor with a high enough frame count, then your monitor won't be able to produce a high refresh rate regardless of how good the specifications are.

If your monitor has a 144Hz refresh rate but the GPU can only display 30 frames per second, a higher refresh rate won't work.

To the dismay of the crowd, Dell announced some amazing monitors, one of which is the new 34-inch Ultrawide curve game monitor which has an 1800R curve, which won't get in your way as badly as Samsung's Odyssey G9 1000R monitor.

Dell claims that this monitor also has an HDR 400 Display, and supports 90 percent of the DCI-P3 color range. Dell also made a 32 inch curve QHD gaming monitor (model S3222DGM) which has a VA panel with a refresh rate of 165Hz and a response time of 2ms. 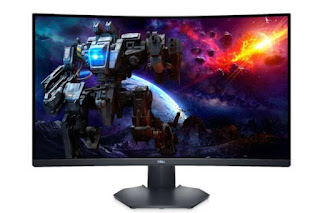 Apart from the 32 inch ones, there are also other options that are smaller by 27 inches. Both will be released in China on May 7, and will be available globally on June 22.

This monitor is a non-curved 24.5-inch FHD gaming monitor (model S2522HG) with an IPS panel which is also G-Sync compatible, apart from FreeSync Premium of course. The screen also has a refresh rate of 240Hz and a response time of 1ms, which is amazing. This one monitor will be released in China on May 7th, and will be available globally on May 27th.

As usual, each of these new Dell monitors comes with a stand that offers a variety of options, including adjustments for height, pivot, swivel angle and tilt. For those of you who want a monitor with an extraordinary refresh rate, you can try it right away.